An esker is a landform built of sand and gravel deposited by a melt water stream that flowed beneath a glacier. The Ripley esker is a classic esker; it stands 3 to 18 meters above the surrounding plain, and is about 68 to 76 meters wide. Although the Ripley esker is broken into several segments, it has an overall length of about 11 kilometers.

The narrow, sinuous, steep-sided ridge of sand and gravel that forms the esker is flanked on both sides by a row of small lakes and depressions. A vigorous sub glacial stream eroded a channel bed initially wide enough to contain those flanking depressions. The ice that surrounded the stream was under pressure from the glacier's weight. When the stream's flow diminished, the ice squeezed inward to form a narrower tunnel. The smaller, slower stream in the smaller ice tunnel could not carry as much sediment, and it began to deposit it on the streambed. As the sediments accumulated, they raised the level of the streambed and along with it the stream, which continually melted the ice above it and kept an open passage. This narrow, raised streambed grew to a height that became the ridge one sees today above the surrounding plain. The esker slopes down from the ridge along its length because the sediment slumped after the glacier melted away.

The Ripley esker was formed beneath a tongue-shaped lobe of ice called the Superior lobe, which flowed into this area from the northeast about 20,000 to 15,000 years ago. The Ripley esker was deposited as the Superior lobe receded. The sands and gravels of the esker were derived from the Lake Superior basin and include reddish volcanic and sedimentary rocks as well as Lake Superior agate. The pile of glacial sediment (silt, sand, gravel, and boulders) left at the edge of the Superior lobe at the point of its furthest advance is called the St. Croix moraine. It is the broad swath of high hills that lies to the west of the esker.

The best views of the esker are in the spring and fall, when the trees have no leaves and the prairie grasses are the dominant feature on the top of the esker.

Managed by the Department of Natural Resources. 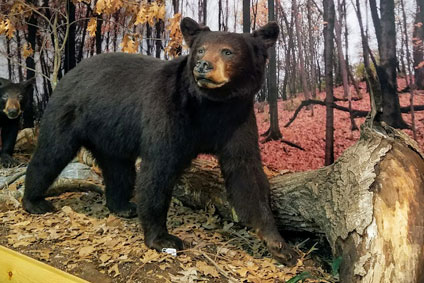